Whether you’re a local wanting a romantic date night or a Disney visitor wanting to experience the fireworks in a new way, this guide is going to help you figure out where to watch fireworks outside the parks at Disney World for free.

There are places that you can watch the fireworks outside of the Disney parks by paying for a dining or private boat ride experience, but this isn’t always conducive to your budget or to getting a quick glimpse of the fireworks and then being on your way.

Please, please do note that all of Disney’s fireworks shows are meant to be enjoyed inside the parks for maximum entertainment (obviously), so while some of these viewing spots are better than others, you’re still not going to get the FULL effect at any of them.

If you’re okay with that, let’s get started!

Where can you watch Disney World fireworks for free?

Where to Watch Magic Kingdom Fireworks for Free

While this show does rely more on projections than Wishes did, Happily Ever After still has plenty of fireworks to be enjoyed that take place over Cinderella’s Castle.

1. 4th Floor at the Contemporary

One of the prime viewing spots is the fourth floor of the Contempory Resort.

There’s a free observation deck that can be used by both resort guests and non-resort guests.

You can also access a couple exterior stairwells from the deck that are also good viewing points a bit higher up.

One thing to keep in mind with this option is that it is sometimes used as a private event space, so it’s worth seeing if you can check ahead if it will be open rather than making the journey and then being out of luck.

Watching the Magic Kingdom fireworks from the Wilderness Lodge and Fort Wilderness boat is seirously one of my favorite ways to see them even if I had the choice to see them from within the park.

You’ll get an incredible view of the fireworks from the water, the same view that paying private cruise guests get, and you can simply stay on the boat as it takes you back to the Wilderness Lodge.

You don’t need to be a guest at the Wilderness Lodge to take advantage of the free water transportation.

Watching the Magic Kingdom fireworks from the Polynesian Beach has been a classic way to watch Disney fireworks for free since the opening of the resort.

Not only is the Polynesian a beautiful resort that deserves to be explored in its own right, but the beach also has a dead on view of the fireworks show AND they often pipe in the music.

This is one of the most relaxing ways to watch the Magic Kingdom fireworks for free outside of the park, as you can sip on a drink or bring some snacks and chill out in the sand. It’s great as part of a Disney resort hopping day, one of the best things to do at Disney World for free.

I have seen this closed off to non-resort guests during popular times of the year, such as the New Year’s Eve fireworks, so do check on this one in advance.

Whether you’re staying at the Grand Floridian or just want somewhere to watch the Fireworks at Disney World outside the parks for free, head to the Marina there for a nice view of the show.

5. Ferry Dock at the Transportation and Ticket Center

One of the biggest dilemmas with families is deciding whether or not to stay inside the park to watch the Magic Kingdom fireworks, as everyone dreads heading out in huge crowds.

One top tip to avoid this is to leave the park just a bit before the fireworks start, then watch them from the ferry dock at the Transportation and Ticket Center.

Not only will you get to experience at least some of the fireworks, but you’ll already be at the Transportation and Ticket Center in front of everyone else so you’ll get to your car first.

And that – is priceless.

Where to Watch Epcot Fireworks for Free

Epcot‘s Illuminations was both a fireworks and a projection and light display on a rotating globe in the center of the World Showcase Lagoon, though currently Epcot has a temporary show called “Epcot Forever.”

Many of the effects are lower to the ground and only viewable from around the World Showcase.

However, it is possible to catch a glimpse of some of the higher fireworks from outside the parks, so here’s a rundown of where to head to watch the Epcot fireworks for free.

Not only is the Boardwalk area good for nighttime entertainment at Jelly Rolls or eating an ice cream while strolling by the water, but it’s also a place where you can see some of the Epcot fireworks.

Get some take out ice cream from Beaches and Cream at the Beach Club, and then head over to the Boardawalk for showtime.

7. Bridge between Boardwalk and Swan and Dolphin

One of the best places to see the Epcot firework’s show outside of the parks is by standing on the bridge between the Boardwalk and the Swan and Dolphin hotel.

This has a better view than most of the places on the Boardwalk, and while a little out of the way for people not staying at either resort, you can combine it with a trip to the Boardwalk and wallah – evening sorted!

This isn’t one to make a special trip for, but if you’re staying at Caribbean Beach Resort, you can see the taller Epcot fireworks from some of the beaches and quiet pools.

Ask at reception when you arrive the best place for viewing, and just know that you’ll get a glimpse or two – not the whole spectacle.

This is a more convenient location for people staying at the Yacht or Beach Club, and you can tie it in with dinner at Ale & Compass at the Yacht Club or Cape May Cafe at the Beach Club.

Where to Watch Hollywood Studios Fireworks for Free

Hollywood Studios Fireworks vary depending on the time of year, but currently they’re running Star Wars themed fireworks that can be seen for free from a few places outside the park.

Head to the beach at the Beach/Yacht Club for a view of some of the bigger Hollywood Studios fireworks.

I wouldn’t make a special trip anywhere to see the Hollywood Studios fireworks, to be honest, but if you’re already in the area or considering a night spent exploring either of these beautiful resorts, it’s worth knowing about.

11. Bridge between Boardwalk and Swan and Dolphin

Another option to watch the Hollywood Studios fireworks is the same place you can see parts of Illumination from – the bridge between the Boardwalk and the Swan and Dolphin.

Where is your favorite place outside of the parks to watch Disney fireworks for free? 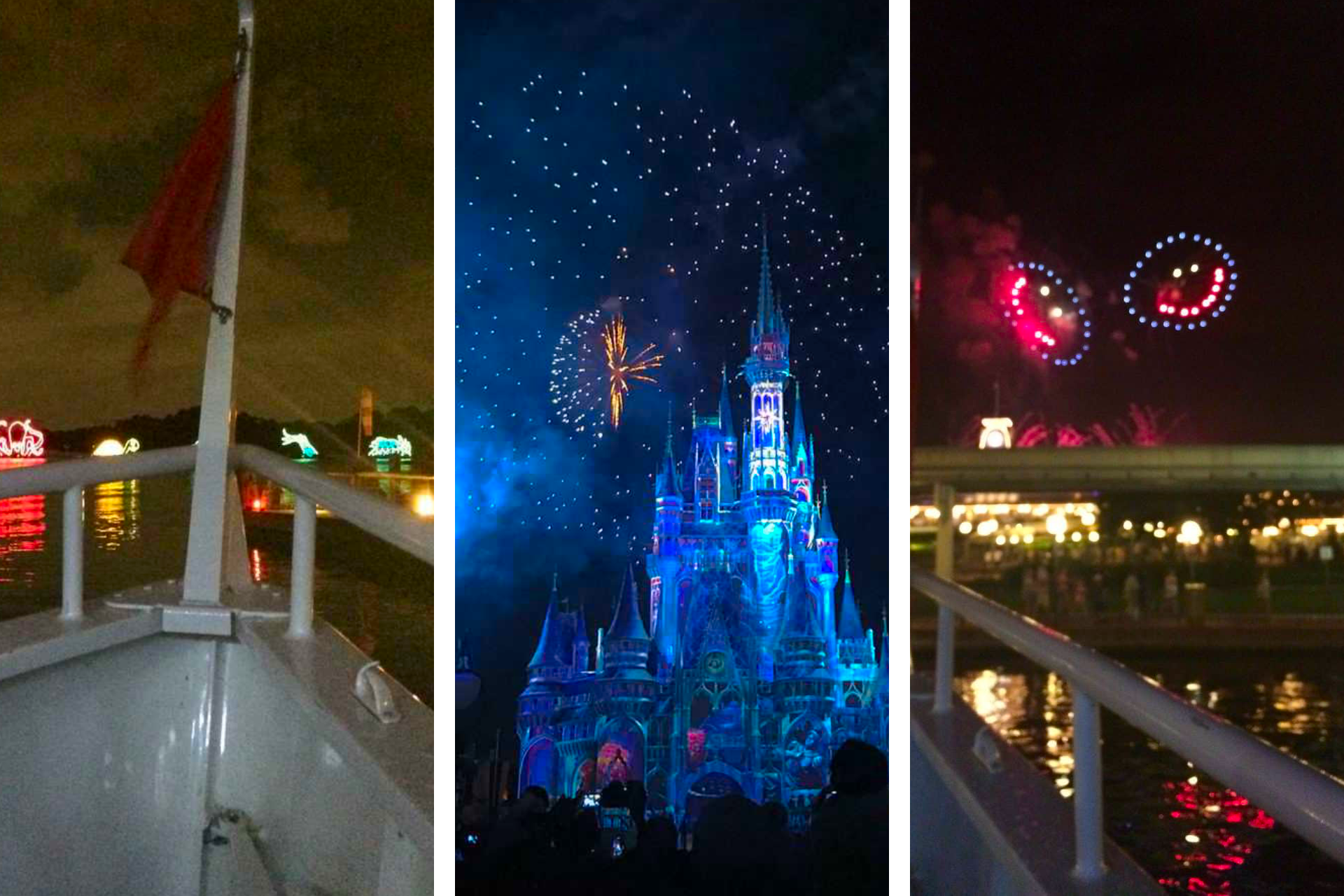